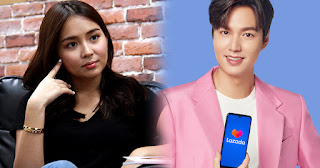 The public are shocked but at the same time, amazed that the two will be interacting for their endorsement.

According to Kathryn herself, even she had a hard time believing that she will team up with Lee Min Ho.

She also said that she wishes for the actor to finally visit the country for she really wants to meet the King Eternal Monarch lead star.

“Hopefully, ‘pag maayos na lahat to, he can visit us here kasi ang dami niyang supporters dito sa Philippines including me,” she said

Aside from her brand endorsement, Kathryn is gearing up for her upcoming situational comedy show The House Arrest of Us with her long time reel and real boyfriend, Daniel Padilla.

Just recently, Daniel thanked the award winning actress for her full support for the actor’s first ever digital concert.

Aside from being beside the actor singer the whole time, Kathryn also took in charge of accommodating everyone who had a hard time registering for their slots and their tickets through her step by step instruction on her Instagram story.

She also threw an intimate surprise party for her boyfriend after the successful event.

Kathryn then wrote an appreciation post for Daniel, to which the Kapamilya A-lister replied with such sweet comment.