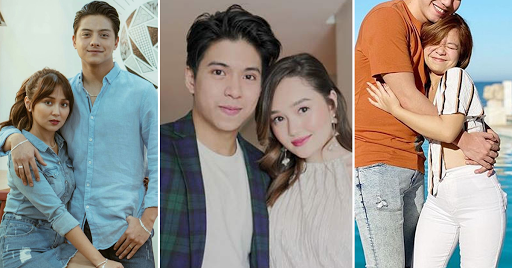 Goin Bulilit is one of ABS CBN’s long time kiddie gag show that became an avenue to a lot of young artists towards more opportunities in showbiz.

All of them are now successful actors and actresses and is now slowly taking their path towards settlement with their significant others.

After Carl John’s wedding with her non-showbiz wife, who among these GB wonders are the next to tie the knot?

The actress have turned into one of the most prominent Kapamilya stars together with her boyfriend and on screen partner, Daniel Padilla. When asked about the next step of their 8 year relationship, Daniel said that perhaps wedding is just 3-4 years away!

After being linked with Ang Probinsyano lead star Coco Martin, the actress took hiatus to get a hold of her private life and eventually give birth to her son in Germany.

After Going Bulilit days, his love team with Sharlene San Pedro eventually faded away as he started dating someone else. As of the moment, he is in a relationship with another GB alumna, Mika dela Cruz

The actor and now a Youtube vlogger is happily in a relationship with his long time girlfriend, Erika Rabara

The chubby and bubbly child star eventually turned into a handsome young man! Igiboy is currently in a relationship with his girlfriend, Ericka Tan

Oh how cute CJ and his girlfriend are! We are totally living for CJ’s sweet and cute Instagram posts for his lover, Reign Maitim all the time!

The comedienne couldn’t get any happier with her boyfriend, Stephan Estopia who constantly treats her like a princess!