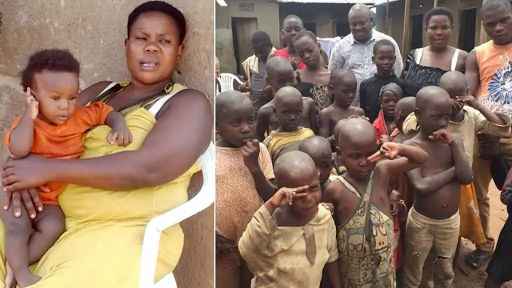 Carrying a child is not an easy task. As the old adage goes, when you’re giving birth, one of your feet is already in the grave. Pregnancy, as miraculous as it is, also brings a lot of complications to a woman’s health. This is also the reason why doctors recommend birth spacing for women. This is beneficial not only for the entire family, but also for the mother’s well-being.

But the bizarre story of this woman from Uganda is truly a wonder. A woman who goes by the name of Mariam Nabatanzi has proudly given birth to 44 children!

According to reports, she was only 12 when she married into a much older man. Now, at age 36, she has 44 children from her 15 pregnancies.

Just like many girls in their village, Mariam has been a young bride. She wed with a 40-year-old man when she was just twelve. A year later, Mariam gave birth to her firstborn.

But a rare health condition will cause her to give birth to 43 more children in multiple pregnancies. Mariam was diagnosed with unusually large ovaries.

Normally, a fertile woman only releases one egg every month. But in Mariam’s case, she can produce several eggs per cycle! This is also the reason why she can conceive a baby so easily, compared to other women her age.

It seems like multiple births also run in the blood of Mariam’s family. The 36-year-old mother gave birth to a total of six sets of twins, four sets of triplets, and five sets of quadruplets! Sadly, six of her babies did not survive to adulthood, leaving her with 38 kids to take care of.

Due to her condition, the doctors have advised Mariam against conceiving another baby again. They were worried that another pregnancy might take a toll on her health.

She also simply couldn’t use birth control pills, as the sudden changes in her hormones could lead to more harm than good due to her condition.

What can you say about this bizarre story? We’d love to hear from you, so don’t hesitate to share your thoughts with us in the comments section below. For more updates on the latest happenings, feel free to follow us on Facebook.