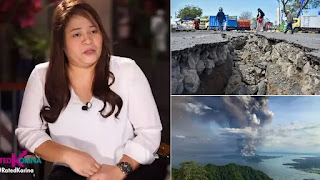 We’re only three days into the new year, but it seems like 2021 already has a lot in store for us. At least, that’s what renowned fortune teller Rudy Baldwin tells us. Rudy Baldwin rose to popularity on social media for her horrific predictions that allegedly came true. And just recently, Baldwin once again shared her shocking predictions for this year.

On January 2, Baldwin warned his followers of an apocalyptic vision that she had in Batangas. According to Baldwin, residents in the province and nearby areas should be on guard for any nature-related incident.

Baldwin says that several disastrous earthquakes will occur in the area. She also described her terrifying vision.

Baldwin was also featured in the latest episode of “Rated Korina.” During her interview, Baldwin claimed that she had more major predictions for this new year. It also involves nature-related disasters and even deaths of popular celebrities.

Do you also believe Rudy Baldwin’s predictions? We’d love to hear from you, so don’t hesitate to share your thoughts with us in the comments section below. For more updates on the latest happenings, feel free to follow us on Facebook.